March 2013 was the first month of the Noah Kai Messer Achievement Award, and this was awarded to Luke Badham, The Noah Kai Achievement Award was sponsored by Noahs nan Caron Runham, and this is awarded to students who acheve above and behond during the month. Noah Messer contracted Acute Myoid Leukemia at the age of 17 months, Noah battled bravely but lost his battle at the age of 3 years, he would have surely be training with his brothers now if he had won his battle.

The Noah Kai Messer Achievement Shield will be a fitting token to Noahs memory. 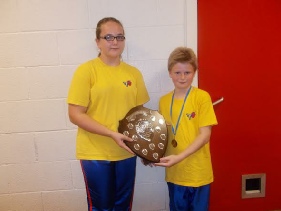